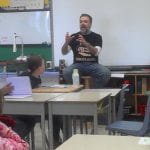 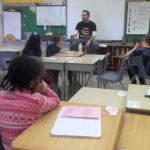 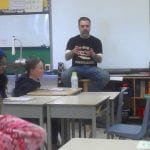 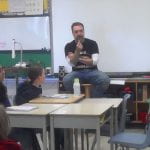 Today we had a visit from Dean Burry!  Who is Dean Burry?  He is the composer who composed Carnival of the Dinosaurs, which was the big piece performed by the Kingston Symphony when we went a month ago.  After finishing our own dinosaur project, we thought he might like to come and talk about dinosaurs and being creative and stuff like that.  And he came!  (It turns out he lives right here in Kingston–only since last June). 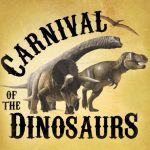 I like connecting with community members like this.  Most people like hanging out with young people who are interested in what they do, and it’s great for the kids to glimpse people’s passions.  Dean is clearly very experienced doing so through his work with the Canadian Opera Company, and from being a dad.  He was very generous with his time and the kids were, as usual, very engaged with great questions and comments.  He loved their dinosaurs, of course.  (If you haven’t had a chance to come and see them, they are up in the hall). Really, a bunch of people sitting around talking about dinosaurs and music is going to work out. 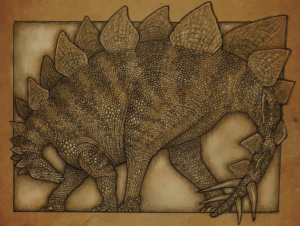 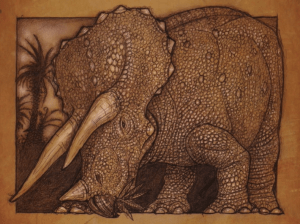 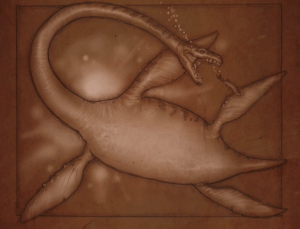 I wanted to share with you at home a video that, with some hesitation, I presented to the class today.  In observing Earth Day and Week, I like to engage students with something inspiring and energizing–some sense that they can participate in caring for our planet.  The kids are usually right there with me–almost like they know this drill.

Greta Thunberg, the Swedish environmental firebrand below, has challenged me (and all of us, including the world’s leaders) to act with much greater urgency–and honesty.  She strips bare the notion that our individual choices can save the planet.  She knows we need big systemic change, and we need it yesterday.  Her message is very heavy, and I am not sure our 9 and 10 year olds were fully ready for it or for her.  But on this Earth Day, I couldn’t think of anybody who is a better voice to share.   Check her out; she pulls no punches.  But I wanted to let you know, as sometimes we hit heavy stuff in class and I don’t always know what kids carry afterward.

And on a lighter note:  Abbott and Costello.  A couple of weeks ago, during Joke Week, we watched “Who’s on First?” the single greatest comedy sketch of all time.  Brayden went home to try and find it and stumbled across another great sketch of theirs.  Today in our math class (we’re circling around to the various operations right now) he and I presented it so we could figure out how can 7 x 13 equal 28?  We watched the video twice and tried to find the mistakes–hopefully it reinforces our own mathematical thinking. 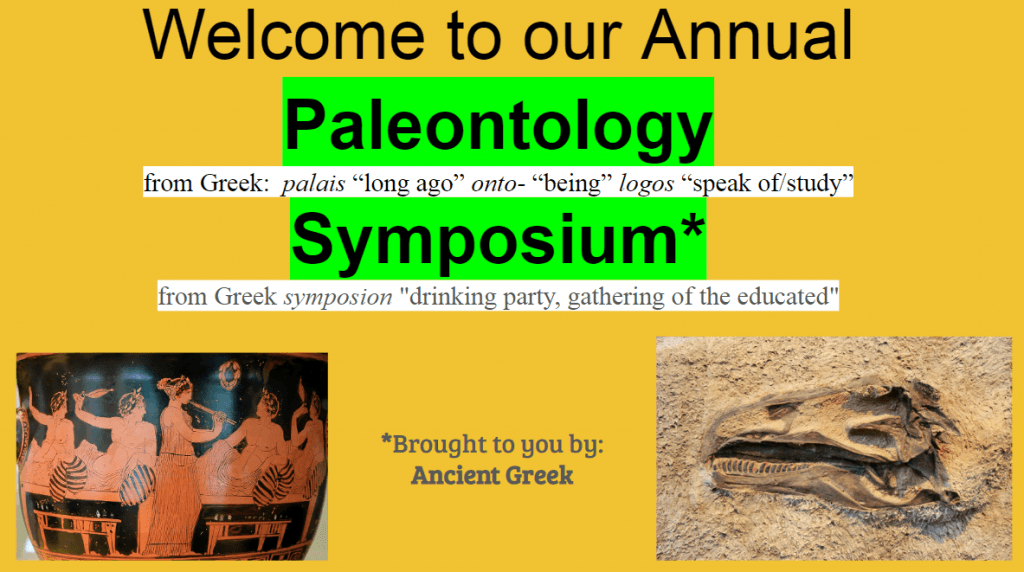 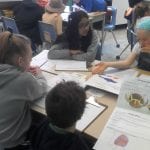 Last week was our Paleontology Symposium–which has become one of my very favourite projects ever!  In the middle of a unit on Ancient Greece and the etymology of Greek in English, why (a concerned parent might reasonably ask) are we doing a project on dinosaurs?!  There’s an, ahem, evolution here I’ll try and explain.  The first question to answer, though, is why are we bothering to learn about Ancient Greek?  This is easier for me to answer.

English is a soup of languages–to an extent perhaps unique among the world’s languages.   Elements of Old English, Latin, Norse, French and Greek are present throughout.  And one of the wonderful things that English does that can be confounding to those who don’t understand it but valuable to those who do is include markers of those languages in its spellings.  We’ve been noticing this all year.  Way back, we saw how words with an initial <wh> or <kn> digraph–are marking their Old English origins.

Greek has a huge presence in modern English–we’ve previously touched on how words with a <ch> digraph pronounced /k/ or a <ph> pronounced /f/ are very often marking Greek (or, properly, “Hellenic”) origin.  Check out “school” or “phone” and you’ll find this is true.  We learned that before the universe, the Greeks believed there was “Chaos”.

Understanding even a couple of dozen base elements of Greek origin can unlock many hundreds of English words.  This deepens our understanding of familiar words and helps us unlock the meaning of new words we encounter.  Our trip to the Kingston Symphony a few weeks ago was timely as a launching point to delve deeper into the Greek presence in English.  Symphony, we learned comes from an element meaning “together” and another we already knew meaning “sound”.  Choreography is literally “dance drawing,” which I think rather poetic. 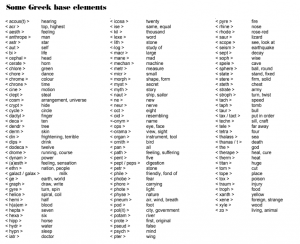 I provided the students with a list of Greek base elements from Real Spelling, and asked them to see if they could connect them to words they knew.  (Try it yourself with the picture to the left).  As they came into focus, students began to see that biology is the “study of life”;  that a hemisphere is “half” a “ball”; an astronaut is a “star sailor” and a photograph is a “light drawing”.   As we discussed the new word symposium, students quickly made connections to other words.  Sympathy is to “feel together”: 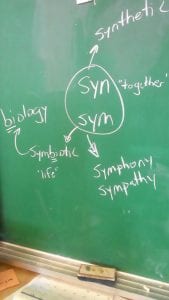 At this age, students will now encounter a greater number of words rooted in Greek and Latin.  Knowing these and other Greek bases will help them comprehend new words and make connections.  At least they will know to look.

Inevitably, we discover that dinosaur is “terrible lizard” and triceratops is “three horned face”.  The world of science, we learn, draws heavily on Greek and Latin to name things.  (This would have come naturally to early British naturalists, as they all read Latin and Greek).  All dinosaur names are Greek in origin.  And so, the obvious way to get us studying the Greek is to invent dinosaurs!  (See how logical this is?)

For the last few weeks our set of highly-motivated paleontologists have been preparing to unveil their latest “discoveries” at an international symposium.  You will see that this is some high-quality scientific writing, well organized into paragraphs, and polished by peer editing and revision.  To say nothing of detailed, labelled scientific diagrams.

And of course, boundless imagination!  Watch for the dinosaur that gets smaller as it ages; the dinosaur that is made of rock; the one that lives in a volcano; the one whose egg forms between its mother’s horns; that has fingers on its tail; that communicates with its fins…and so on!  As one student exclaims in their paper: “You never know where your imagination will take you!”

I hope these pictures convey how seriously they took this project:  from the reports they produced to their earnest discussions.  Please peruse their work here, but also plan to come and see it as it goes on display later this week.

But here’s the thing I am not sure I’ve ever experienced before:  After delegates had discussed their discoveries in their groups of four, I invited them to go around reading the reports of other delegates, maybe take some notes.  So up they got and it was a few moments before I realized it was almost completely silent in the room.  I hadn’t asked them to be quiet–hadn’t hollered at them or anything, I swear!–but it was so quiet!  After a few moments, I grabbed the camera again and made this little video.  Play it on full volume for the right effect:

No Chaos here! (And no wine, either, in case you were wondering.  Our “drinking together” only ran as far as juice boxes).

Why are these students working in such a quiet, focused way? Because they are scholars!  As my friend and mentor says, “Nothing motivates like understanding.”  I believe that is evident here.  In any case, it was delightful to see them take such pride in their own work as well as their peers’.  I look forward to our next symposium!  (And stay tuned for Latin!)

Your child may have come home Friday telling you that on the very same day as our scholarly symposium, their teacher taught them how to snatch a penny off their elbow before it hit the ground.  (And that he may have broken the world record for the number of pennies snatched in one go).  The truth is that this is the truth.  It was the spontaneous follow-up to a very interesting Light investigation we did in Science just minutes before.  Hopefully, in addition to dazzling you with their improved elbow agility they also demonstrated the bending of light using their penny, a cup and some water.  If not, please send the penny back for remedial work.  Behold the dignity of the true scholar and athlete:

For goodness sakes! I am an infrequent blogger at the best of times this year, but there’s no excuse for this post being unposted–I just forgot to hit the “publish” button!  This is from several weeks ago, the students’ responses to our trip to the Kingston Symphony.  Though late, I share this now because their words are so great (we wrote these to send to the Symphony folks) and because it all ties well to the post I’m working on from this past week.

In particular, I note how amazed the students were to hear the idea of a symphony (from Greek sym, “together” and phone “sound”) come alive.  They were agog that these actual humans could work their instruments together to duplicate the Jurassic Park theme.We were delighted by the production of composer Dean Burry’s work “A Carnival of Dinosaurs”.  We had read the poems he’d written for each dinosaur but it was wonderful to hear the music that accompanied each as he read them on the stage.

Powered by WordPress | Hosted by Edublogs | Protected by CloudFlare